Ideas for the Misty the Mouse Block

The sunny weather here has been replaced by more typical rainy weather, so I used my scanner to take photos of my work in progress for my Misty the Mouse project.  This project is too large for my scanner, but the Electric Quilt images will help fill in the whole story.  Here's the EQ version: 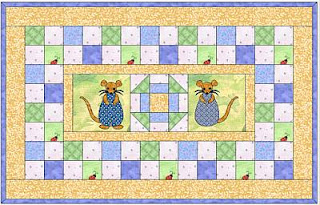 And here's what I have done so far: 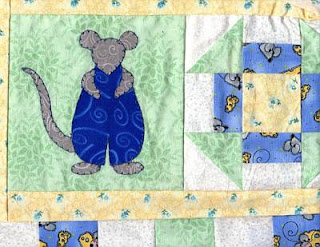 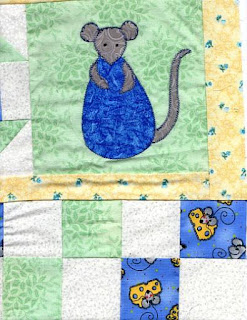 The mouse and Churn Dash blocks are 6" square each (finished size).  They are framed by a 1" finished (1.5" cut) yellow border.  The 4-patch borders are made of 2.5" cut squares, then the entire top is framed by a 2" finished (2.5" cut) yellow border with a blue binding.  You can find instructions for the Churn Dash block here: https://www.generations-quilt-patterns.com/churn-dash-quilt-block.html
The finished project will measure aprox. 32.5" x 20.5".  It will make a cute wall hanging, but mine will go on a small console table where I keep my landline phone. 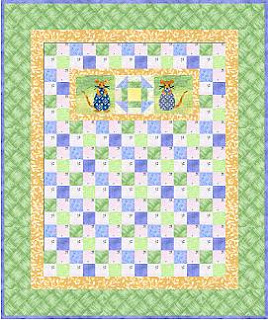 Or, if you need a nursery rhyme themed baby quilt, make 3 applique blocks for a Three Blind Mice inspired baby quilt that might look something like the virtual quilt below, which has three 6" mouse blocks and four plain 6" blocks with 4-patch blocks made from 3.5" cut squares.  I added a 3" strip of background fabric above the mice before adding a 1" blue border and a 3" neutral border. 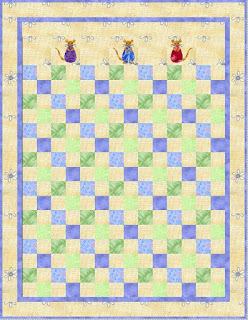 Mice are cute and I have a lot of fun playing with mice, as long as they're not real!  If mice of any kind give you the creeps, substitute another critter block in these pattern ideas.
Posted by Sandy at 6:14 PM No comments:

Sundrop Critter Redux for May

The month of April sure went by in a flash, mostly because my schedule changed and I had very little time for anything quilt related. I'm back on my old schedule this month, thank goodness.  Even with all the extra activities with gardening and sorting through my mother's things, I can still eek out a little quilting time with this schedule.

May's Sundrop Critter redux is Spritz the Chick.  You'll find the free pdf pattern on my website through June 7: sundropdesigns.net 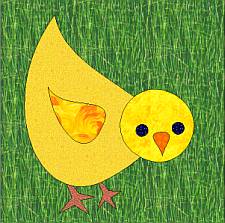 The new Spritz hasn't changed much from the original version.  I enlarged his eyes, beak and feet a little to make them easier to work with, and I changed his posture a bit to make him more animated.  The new Spritz looks like he's busy looking for something good to eat!

I decided to try the new Spritz on a simple mug rug.  I fused the chick onto a large scrap of farm scene fabric and did a simple zigzag around the edges.  Note; I flipped the pattern so that Spritz would be facing the chickens on the fabric.  The eyes are tiny black buttons (for doll clothes, I think) that I happened to find at my local Wal-mart. 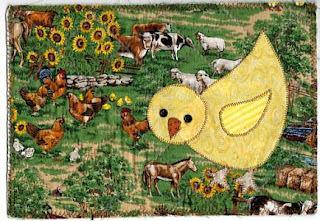 After sandwiching the little quilt and doing some simple cross-hatch quilting with a zigzag stitch, I realized that I had unnecessarily made this project more complicated than intended.  Now I have to actually bind it!  I hope to get to my sewing shed tomorrow to add a single-fold binding, probably in yellow.  Next time I make a mug rug, I hope I remember in time to use the pillowcase method of finishing it -- it's so much faster.

Someday, I hope to make a matching table runner.  Here's the Electric Quilt version of it (just visualize farm scene fabric as the border):

If short on time, here's a simpler table runner idea using the Shoo Fly block and only 2 applique blocks:

Have fun with Spritz!  He'll be replaced by a new free block around June 7.  (I say "around" because I never know exactly when I'll get to my computer to upload things.)
Posted by Sandy at 1:46 PM No comments: