When I moved out to my parents' place 5 years ago, I had to pack and move in a hurry (my old house sold in 3 weeks -- much faster than I anticipated).  As a result, things weren't packed or moved or stored in anything close to the ideal way.  So each summer since then, I've been hauling boxes to the front yard (I live on a hill so there is no backyard) and going through them.  This week as I was cleaning up the shed to set up a sewing machine dedicated to free-motion quilting (I hate changing feet with a screwdriver), I came across one of last year's finds: a stack of 6.5" charms.

The charms were musty and muddy, but I ran them through the washer anyway to see if they were stained permanently.  I got the oddest surprise when I sorted out the laundered patriotic charms.  Many of the charms have a metallic etching in the design, and every charm that had silver etching or that was touching a charm with silver in it was riddled with holes.  They look like red, white and blue slices of swiss cheese! 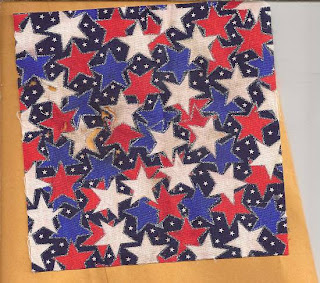 If you look closely at the charm pictured above, you'll see that it's mostly the white stars that are disintegrating.  This was true for all the blocks with the silver metallic etching.  Oddly, the charms without the silver that were in direct contact with one that did have silver suffered the most -- take a look at this one: 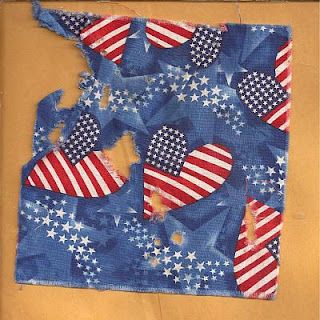 There was one charm with gold metallic etching -- it didn't even have the tiniest hole in it!  But it was horribly stained so I tossed it (before I thought to take a pic).

Incidentally, there was a stack of 30's repro charms stored in the same shoebox as the patriotic charms.  They have some stain damage, but there isn't a hole in any of them.

Have you ever encountered a problem like this?
Posted by Sandy at 4:27 PM No comments: