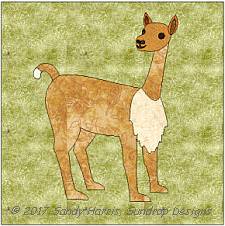 The newest critter to the Sundrop zoo is Val the Vicuna (also spelled vicugna).  (The "n" in vicuna is the Spanish letter en-yay but I can't find a symbol for it on Blogger.) Vicunas are the smallest member of the camelid family, weighing about 150 pounds when full grown.  They are native to South America where they live wild in the higher alpine regions of the Andes Mountains.  Their coats come in a variety of shades of brown, with white bellies and inner legs, and a white "bib" of hair that is longer than that on most of the body.  Some have legs that are all light in color, especially the lower half of the leg.  And most have white muzzles and white throats.  Some have other white markings on the face or on their sides.  I chose to simplify this pattern and focused on the most important attributes.  (Maybe someday I'll design a more realistic version.)  They also have long, dark eyelashes - the kind we girls envy!

Vicuna fleece makes some of the finest and warmest yarn in the world and is therefore very high-priced, making the vicuna susceptible to poaching.  In the 1970's, their numbers were so low that the vicuna was listed as an endangered species.  Efforts through local people and several organizations worldwide curbed the poaching enough that the vicuna population has grown and is no longer considered endangered.  Organized round-ups are conducted every few years to shear the fleece.  It is then sold, with most of the profits going back to the local communities.

This pattern is free through May 31, 2017 on my website: sundropdesigns.net