UFOs and Back to Some Sort of Normal

This last month has been crazy.  My dad developed an infection and had to be hospitalized, and was moved to a rehabilitation center last week.  We're still uncertain where he will go from there.  A nursing home or a memory care center are the most likely possibilities.  And my mom is looking for an apartment in a senior housing center.  Changes are happening, changes are coming.

The first change for me was to get some sleep and become human again.  I have been getting more sleep.  I'm still working on the becoming human again part.  Filling out paperwork, scheduling rides, dealing with leaking roofs, a contrary pellet stove, unseasonal snowfalls and so on still adds to the stress levels around here.  I'm guessing it might be that way for the next six months, at least.

On a free afternoon, I spent some time in my shed trying to sort through the clutter and make sense of things.  After getting interrupted in the middle of something so many times, my shed looks like a tornnado blew through and rearranged everything.  Dusty, my puppy who turns one year old at the end of this month, seems to like to help with rearranging my stuff.  I'm not sure where he found them, but he somehow unearthed two UFOs from a good ten years ago.  Both are doll quilt tops inspired by scraps of focal fabrics too small to do much with but too special to toss. 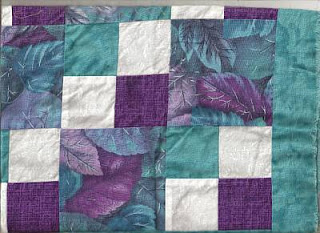 I loved the gorgeous leaf print scrap in this top and it was just big enough to cut into ten 4.5" squares.  It became a UFO when a young child spilled glitter paint on it.  By the time I got the paint washed and scraped off, it was time to pack it up and move.  Repeated washings dulled the brightness of the leaf print and frayed the border so much that I'll have to trim at least .5" off.  I'm thinking of adding a wider purple border before putting this one in the to-be-sandwiched pile.  Or maybe it needs a purple-and-white checkered border.... 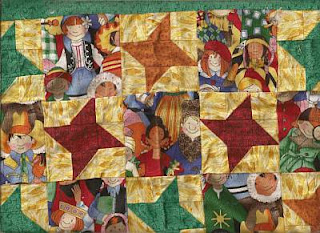 The second top was inspired by the colorful print depicting adorable kids in cultural costumes from around the world.  Alternate Friendship Star blocks seemed perfect for this print.  I nearly had this one quilted ten years ago when my sewing machine burped horribly, made some major thread nests and other weird stuff and I had to remove all the quilting.  It took forever!  And I did it back before I realized that I really needed reading glasses to do such tasks. 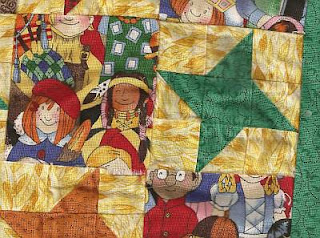 Between me and my machine, the top has three tears that can't be easily repaired.  I've been waiting all these years for inspiration on how to deal with these tears.  Appliqueing something over the tear is my usual remedy, but that doesn't seam appropriate with this top - too busy already.  Sewing rickrack or seam binding on the main seams might work as the tears are either in or right close to a seam.  What do you think?  Any other ideas?

The thought did occur to me that, as a wall quilt, repairing the tears really isn't important - the quilting will be enough to hold it all together.  But what if some little girl someday wants to spread it on the floor for a picnic with her teddy bears and the bears spill their honey and the quilt has to be washed?
Posted by Sandy at 6:10 PM 1 comment: