15 degrees F is just plain too cold, especially if you live in a travel trailer.  Even with three fleece blankets, a quilt and four cats piled on me last night, and the electric oil-type heater on, I could feel the cold.  If it hadn't been for the fleece curtains I made last summer for the window by my bed, I'm sure we'd all have felt like popsicles this morning.  Making curtains out of blanket fleece was the best idea I had for 2010!

At 9:30 this morning, Goosey knocked on my door with her beak, telling me she wanted food and water.  The snow is still covering the grassy areas, so she's been eating bread and sneaking cat food the last few days (she's a picky goose and refuses to eat feed grain).  I could put more bread out for her, but there was nothing I could do about the water - it was still only 24 degrees out.  I did see her pecking at the snow, so she isn't totally without drinking water.  She just doesn't have any for bathing and playing in.  Although it warmed up to 35 today, the ice and snow have not melted.  It's supposed to get warm enough to rain tomorrow, so maybe Goosey will finally get some water.
Posted by Sandy at 10:56 PM No comments:

Today was a Snow Day - a day when kids stay home from school and places that have the option of closing do so.  The weather forecasters were predicting anything from a few inches to two feet of snow last night.  We got one inch!  There's a good chance that there'll be no school tomorrow either.  The temperature is supposed to drop to 20 degrees F tonight, turning all that slushy stuff to a sheet of ice.  I won't be going anywhere until it melts.

When my friend J was here yesterday, a little bird flew into my shed window.  It was temporarily stunned enough that J snapped a photo. 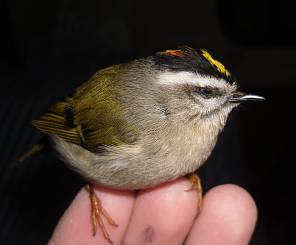 This was an unknown species to either of us, so I went online to see if I could solve this mystery.  I got lucky!  I found a site called identify.whatbird.com and even at the slow speed of 28.8 bps it only took ten minutes to learn that this little bird is a Golden-crested Kinglet.  I wish you could see the irridescent olive colorings in his wings.  I've always thought of olive as a drab color, but it's rather jewel-like on this tiny bird.
Posted by Sandy at 11:57 PM No comments:

The weather turned wet and cold again a few days ago, so I've been staying indoors hugging the heater - well, I would if I could!  But today was shopping day so I had to venture outdoors.  The sun had actually made an appearance before I returned home, so I poked around outside to check on Goosey's eggs.  Goosey has been a busy lady: there are now 12 eggs in the nest that I rarely see her sitting on (I can see it from my office window).  Either she hasn't got much in the mothering instincts department or she knows that sitting on those eggs is a complete waste of time.

Monday is garbage pick up day.  The eggs will mysteriously disappear this weekend.  I won't feel so bad knowing that Goosey doesn't seem to be much of a mother goose.  Of course, if I had to sit on eggs in 30-degree weather with snow and rain falling on me, I would be shirking my duty, too.  I wonder why Goosey chose to lay eggs out in the open instead of in a sheltered spot under cover?  There are plenty of sheltered spots around here to choose from, including the one that was especially built for Goosey.

UPDATE:  Goosey caught us in the act of removing her eggs.  Although she gave us quite a scolding, she didn't attack anyone.  Half an hour later, she seemed to have either forgiven us or forgotten the incident.
Posted by Sandy at 11:47 PM 1 comment:

Goosey and the Case of the Missing Eggs

A few months ago, I acquired the pet goose of someone who had to move where pets aren't allowed.  Goosey (she came with the name and she knows her name so Goosey she is) has been very good at keeping the grass cut.  She's also very good at fertilizing it.  This is my first up-close experience with a goose.  I would never have guessed that a single goose could produce such a large volume of fertilizer.  I'm glad she didn't come with a mate! 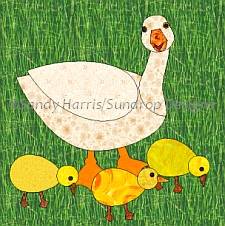 Late last week, Goosey began to behave rather strangely, being quite friendly one minute then nibbling at you the next.  We wondered what was going on until Monday morning arrived and we found Goosey sitting on half a dozen eggs near the edge of the driveway.  Having read about the extreme measures parent geese will take to protect their offspring, including eggs that won't produce any offspring, we took a wide berth around Goosey.  She sat on those eggs all day.

On Tuesday morning, I noticed that Goosey was farther up the hill cutting the grass, so I went out to get a good look at the eggs.  I found a bowl-shaped depression in the grass, but no eggs.  And everytime I went outside or looked out a window, Goosey was wandering about cutting more grass or playing in the water or teasing the dog and cats.  (Although Goosey is the newcomer, she acts like she is Manager of All Four-footed Critters, and maybe the two-footed ones, too.)  I didn't see any broken eggshells nearby, so I ruled out the raccoons as possible theives.  The humans that knew about the eggs said they didn't take them.  So where did six very large eggs go?  Could a goose somehow move the eggs without breaking any?  It seemed unlikely, especially since the only choices were a gravelled driveway one way that soon went downhill or a blackberry thicket the other that also eventually went downhill.

A neigbor down the road reported that their dog had been attcked by a coyote Sunday night, so we wondered if the coyote had returned Monday night and taken the eggs.  That, too, seemed unlikely.  Another neighbor's chickens or their eggs would be more tempting and a lot easier to transport via coyote mouth, I think.  So I've been watching Goosey for several days now, waiting to see if she'd lead me to a new nest.  She didn't.

A friend came out today and parked her old, boat-sized car near Goosey's empty nest.  She came in and said, "You'll never guess what I almost stepped on.  Goosey's new nest!  And all six eggs are in it!"  Goosey had moved her eggs a few feet away, still near the edge of the blackberry thicket, and had covered the eggs so well with dried grasses that they were pretty much undetectable.  And she knew not to sit there when anyone was nearby.  Clever Goosey!

I wonder if she knows that those eggs are never going to hatch?
Posted by Sandy at 11:12 PM No comments:

Let's try this blog thing again - I think I have a better understanding of how to do it.  I hope. 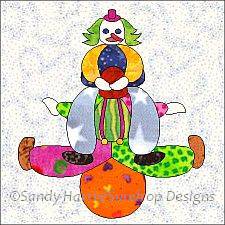 When it comes to finding my way around here, I feel like the clown on the bottom!


I've been on the computer nearly all day doing damage control on my web site.  When I loaded the files onto my new computer, something went crazy somewhere and messed up the html codes for all the images.  Sometimes I think computers have little prank-loving imps in them who love playing practical jokes on us poor humans.  Now I have to go through every page and correct the code for every image.  It's tedious work.  I got a whopping three pages done today.  I think I deserve a day at the sewing machine tomorrow!
Posted by Sandy at 11:47 PM No comments: